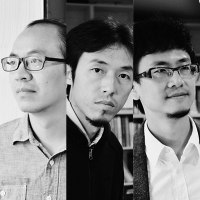 IDO (Init Design Office) is a team of architects based in southwest China, formed by Chen Jun, Zong Dexin and Su Yunfeng. The studio was founded in Chongqing in 2012.
Zong Dexin (1977), partner of IDO, architect, associate professor, member of the China Green Building Youth Committee. In 2004, he graduated from Chongqing University School of Architecture and Urban Planning. Later, he taught at the school. In 2007, he went to the Research Center for Ecological Architecture at the Lisbon University of Science and Technology in Portugal. He worked at MarioSuaKay in Portugal.

Su Yunfeng (1978), partner of IDO, registered first class national architect. In 2005, he graduated from the School of Architecture and Urban Planning at Chongqing University. In 2007, he went to the Helsinki University of Technology in Finland (now called Alva Aalto University). After graduating with a master's degree, he worked at Chongqing Hexin Architectural Design Institute Co., Ltd. as deputy chief architect.